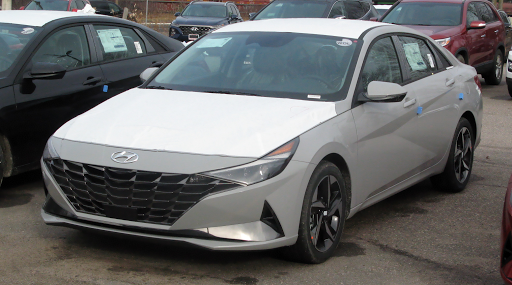 The new Hyundai Elantra 2021 is superior to the previous version in almost every way. Hyundai has tried to increase the area of ​​everything inside the car, including the size of the high-end passenger compartment and the size of the infotainment screen, as well as a large list of basic and optional features, without forgetting the new distinctive exterior design that the new Elantra will come with, full of triangles.

Elantra will offer three grades, namely SE, SEL and Limited, in addition to the hybrid version of the Elantra Hybrid, and pricing has not yet been announced before the Elantra goes on the market in late 2020.

The first option: the base engine would be a 2.0-liter four-cylinder engine with 147 hp.

The second option: the hybrid model with a 1.6-liter four-cylinder engine linked to an electric motor that charges with a 1.3 kWh lithium-ion battery, both producing 139 hp.

Transmission: The base engine is mated to a continuously variable automatic transmission (CVT). The hybrid is fitted with a six-speed automatic dual-clutch transmission.

Elantra 2021 engines will probably not give a quick acceleration, but the verdict remains at the end when the car will be released, and all categories will be tested by experts, but all will be waiting for the N-Line class dedicated to performance, which will most likely be equipped with the 1.6 liter engine and perhaps this category will be supplied. 7-speed dual-clutch automatic transmission.

The exterior design of the Elantra 2021 is almost inspired by the Hyundai Sonata 2020, with a distinctive front grille that merges with the long headlights slanting to the sides, adding only the edge of the bottom of the face, which looks out by about a few centimeters due to pushing the hood slightly back.

On the sides of the car, the car body contains diamond folds that were not in the previous version, giving a distinctive appearance to the car, in addition to the lower roof line that is lower than the previous version, but this decrease will not affect the comfort of the passengers inside the cabin, according to what Hyundai said.

At the rear, the rear lights are immersed in a deep, continuous line that divides the back of the car into two halves, the upper half outside to the front, forming a wing, and the lower half appears to the front more than the top.

In addition to the exterior design, the car's interior has also been redesigned, making it more modern compared to the design of the previous version. The controls are placed diagonally towards the driver, making them easier to access and control. There is sufficient legroom in the back row for adult passengers. The curved roof line appears to affect headroom for adult rear passengers, although Hyundai denies this.

Elantra 2021 will be equipped with an 8-inch touch-screen infotainment screen, and two optional 10.3-inch screens will be provided, one for the driver's infotainment screen and the other for the counters, and it looks like it will be high-end and technically advanced. Apple CarPlay and Android Auto will be available, as well as WiFi and Bluetooth mainly. In addition to the driver's voice recognition feature, you can control the air conditioning, heated seats and internet connection. You will also be able to open the car and start the engine using the smartphone.

As for safety systems, the 2021 Elantra will be equipped with automatic emergency braking with pedestrian detection, lane departure warning and lane-keeping assistance. All adaptive cruise control and track focus are optional.